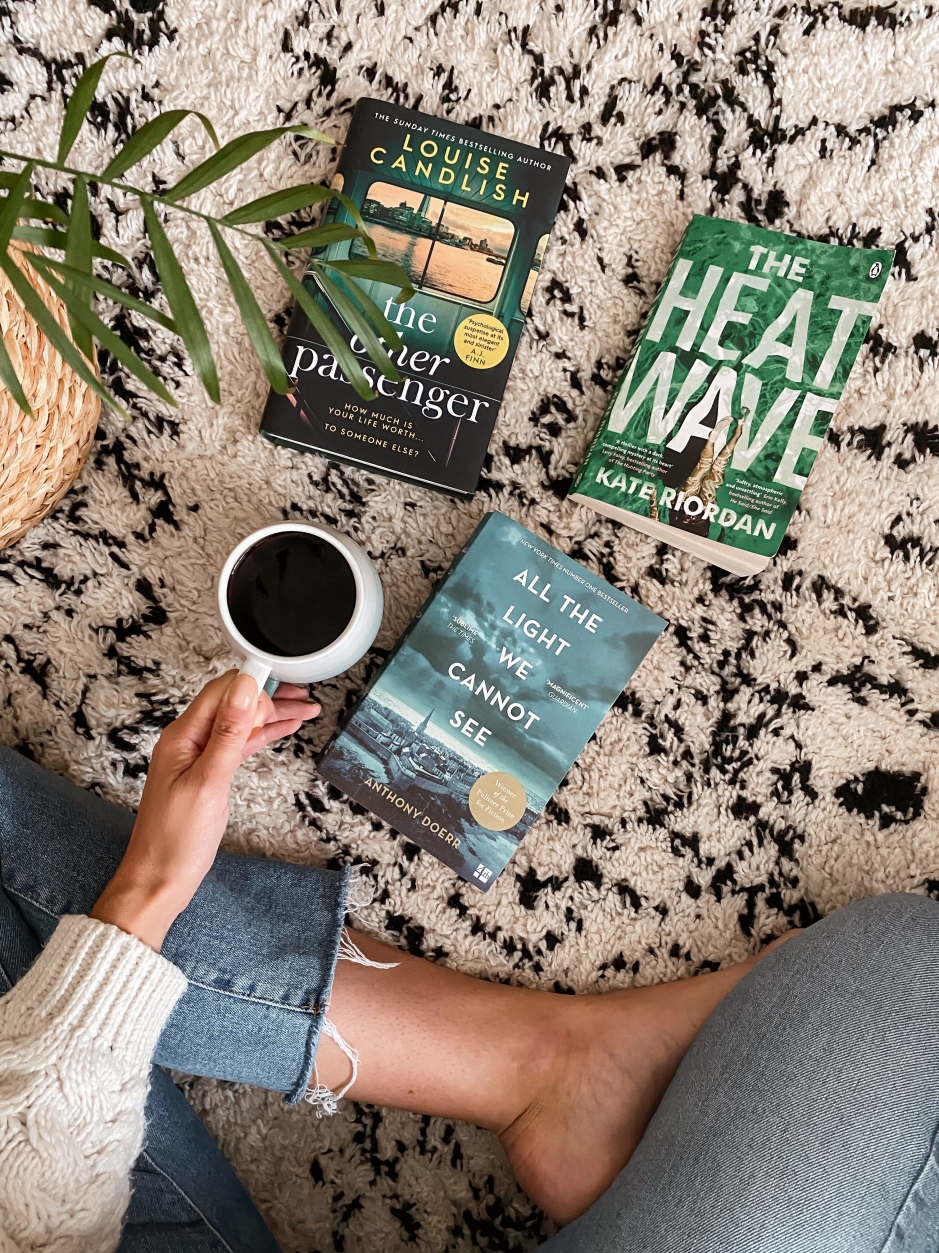 Abby and Ellie were never close as children. Now in their thirties, they each harbour deep-rooted resentment for the other – Abby for her sister’s looks and her status as their mother’s favourite. Ellie meanwhile is envious of Abby’s perfect husband and picturesque home, a villa on the sun-soaked Italian island of Elba.When Abby invites Ellie to stay, both sisters see the break as a chance to relax and put aside their differences. But with their mother Susanna there too, all the simmering tensions of the past quickly rise to the surface. And Ellie suspects that Abby and their mother are keeping a dangerous secret . . .But after a shocking act, the sisters have only each other to rely on. Vulnerable and scared, trusting each other will be the biggest risk of all . . .

I was hooked at the beginning of the book, trying to figure out who should be trusted, what really happened, who the bad guy was…Gradually though, the pace of the book slowed and even though there was some action it felt flat and boring at times. There was no tension which I expect in a good thriller. Also the ending seemed rushed and I wasn’t really surprised by it. Despite this, I loved the setting of this book as we were taken on a road trip across Italy, France and Spain. This book really was the closest I’ve been to a holiday this year! Overall, I would recommend this if you are after an easy summer thriller read.

Anthony Doerr: All The Light We Cannot See

Marie-Laure lives in Paris near the Museum of Natural History, where her father works. When she is twelve, the Nazis occupy Paris and father and daughter flee to the walled citadel of Saint-Malo, where Marie-Laure’s reclusive great uncle lives in a tall house by the sea. With them they carry what might be the museum’s most valuable and dangerous jewel.In a mining town in Germany, Werner Pfennig, an orphan, grows up with his younger sister, enchanted by a crude radio they find that brings them news and stories from places they have never seen or imagined. Werner becomes an expert at building and fixing these crucial new instruments and is enlisted to use his talent to track down the resistance. Deftly interweaving the lives of Marie-Laure and Werner, Doerr illuminates the ways, against all odds, people try to be good to one another.

I can see why this book has such amazing reviews but it just wasn’t for me. In a way I felt guilty for not liking it and spent days thinking that there was something wrong with me. The writing was beautiful and so descriptive that at moments I felt I was there but when it comes to describing the characters I felt nothing. While I was crying through The Nightingale which had a similar theme, this story didn’t awake a single emotion in me. I couldn’t connect with the characters, couldn’t feel for them and that’s why I didn’t feel the emotion of the story. I was expecting a heart-breaking masterpiece but I found myself a bit bored and irritated with this book. The best part of the book was the ending and not just because I was so relieved it finished, but because something actually happened.

When Sylvie receives a letter calling her back to her family home in the South of France, she knows she has to go. In the middle of a sweltering 1990’s summer marked by unusual fires across the countryside, she returns to La Reverie with her youngest daughter Emma, ignoring the deep sense of dread she feels for this place.As memories of the events that shattered their family a decade earlier threaten to come to the surface, Sylvie struggles to shield Emma from the truth of what really happened all those years ago. In every corner of the house, Sylvie can’t escape the specter of Elodie, her first child. Elodie, born amid the ’68 Paris riots with one blue eye and one brown, and mysteriously dead by fourteen. Elodie, who reminded the small village of one those Manson girls. Elodie who knew exactly how to get what she wanted. As the fires creep towards the villa, it’s clear to Sylvie that something isn’t quite right at La Reverie . . . And there is a much greater threat closer to home.

The story is told from Sylvie’s point of view in alternating time periods — during the summer of 1993, and then 1968 forward — as we learn about the disturbing mother/daughter relationship between Sylvie and Elodie during her childhood. The story was well written and slow burning. The setting is perfect, and with the way the author describes the scenery, it feels like you’re there with them in the south of France but it felt really claustrophobic at times because of the heatwave, fires and the lack of mobile communication in 1993. I really enjoyed reading it and found it hard to put down but I have to admit I was left slightly confused the way it ended and to be honest I had to go back and read through again to make sure I had taken it all in. Therefore, I can only give this book 4 stars. Overall, I highly recommend it for an easy summer read.

Louise Candlish: The Other Passenger

On the morning of Monday 27th December, Jamie Buckby takes the commuter riverboat from his home in St Mary’s, southeast London, to work in Central London, noting that his good friend and neighbour Kit Roper has not turned up for the 7.30am service they usually catch together.
At the London Eye, where he disembarks for his job in a café behind the South Bank Centre, Jamie is met by the police. Kit has been reported missing by his wife.
As Jamie is taken in for questioning, he discovers someone saw him arguing with Kit on the boat home late on Friday night. The other passenger believes Jamie committed murder.

After I read her first book Our House, I thought I would never read any of Louise’s books again. I really disliked it. So this book was a lovely surprise. What a page turner! And it’s set on the commuter boat to Central London which is very unusual. There is nothing predictable about this book, the moment I thought I figured everything out, Candlish brought another twist to keep me on my toes. This was most definitely my kind of book! It got me hooked from start to finish and I was sad when I finished it. Brilliantly written, fast paced and full of twists and turns… it’s a must read. One of my favourite thrillers of 2020.

Is anyone’s life as perfect as it looks? Beth shows that women really can have it all; Ruby lives life by her own rules; Lauren is living the dream. But. Beth hasn’t had sex in a year. Ruby feels like she’s failing. Lauren’s happiness is really just fake news. All it takes is one shocking event to make the truth come tumbling out…

What a great read! I really enjoyed the story and the messages and it made me laugh out loud in places! The story is told via the alternating perspectives of Ruby and Beth and occasional Instagram posts from social media celebrity Lauren. Ruby is struggling to manage a health condition which severely affects her self esteem, as well as struggling to bond with her three and a half year old daughter as a single mum. Beth is a wedding planner, planning the celebrity wedding of the year with her assistant Risky while her husband (who refuses to touch her) looks after their newborn son at home. The characters are believable and real (maybe too real). They are far from perfect but the writer makes them very likeable. The thing that I liked most about this book is that Dawn covers a range of serious subjects from marriage, parenting and motherhood to women’s health, body image, and mental health with humour and ends it with a positive message. Just to warn you, this book is not for prudes because you won’t find it funny! For everyone else, I highly recommend it!

In seven days, Maggie’s son, Max, turns three. But she’s not planning a party or buying presents or updating his baby book. She’s dreading it. Because in her world, third birthdays are the days on which the unthinkable happens… she loses her child.For the last twelve years Maggie has been imprisoned in a basement. Abducted aged fifteen, she gave birth to two sons before Max, and on their third birthdays her captor came and took them from her.She cannot let it happen again. But she has no idea how to stop it. And the clock is ticking…

Before I read this book, I’ve read two very similar ones, Room and Dear Child, so I couldn’t stop comparing them. For me this one was not as good as others or maybe it was just that ‘already seen it’ thought that I had while reading it. Considering that there are over 400 pages, this is a very fast read. Through the book I felt like I was on a rollercoaster – It got me hooked at the beginning, then towards the middle it became too repetitive and slow but the last 50 pages were very exciting. The writer does a good job by talking about family and what happens when someone goes missing. I loved how it looked from each character’s perspective. I would have preferred more mystery or a twist though. Overall, it’s a good, fast paced psychological thriller but nothing that hasn’t been done before.