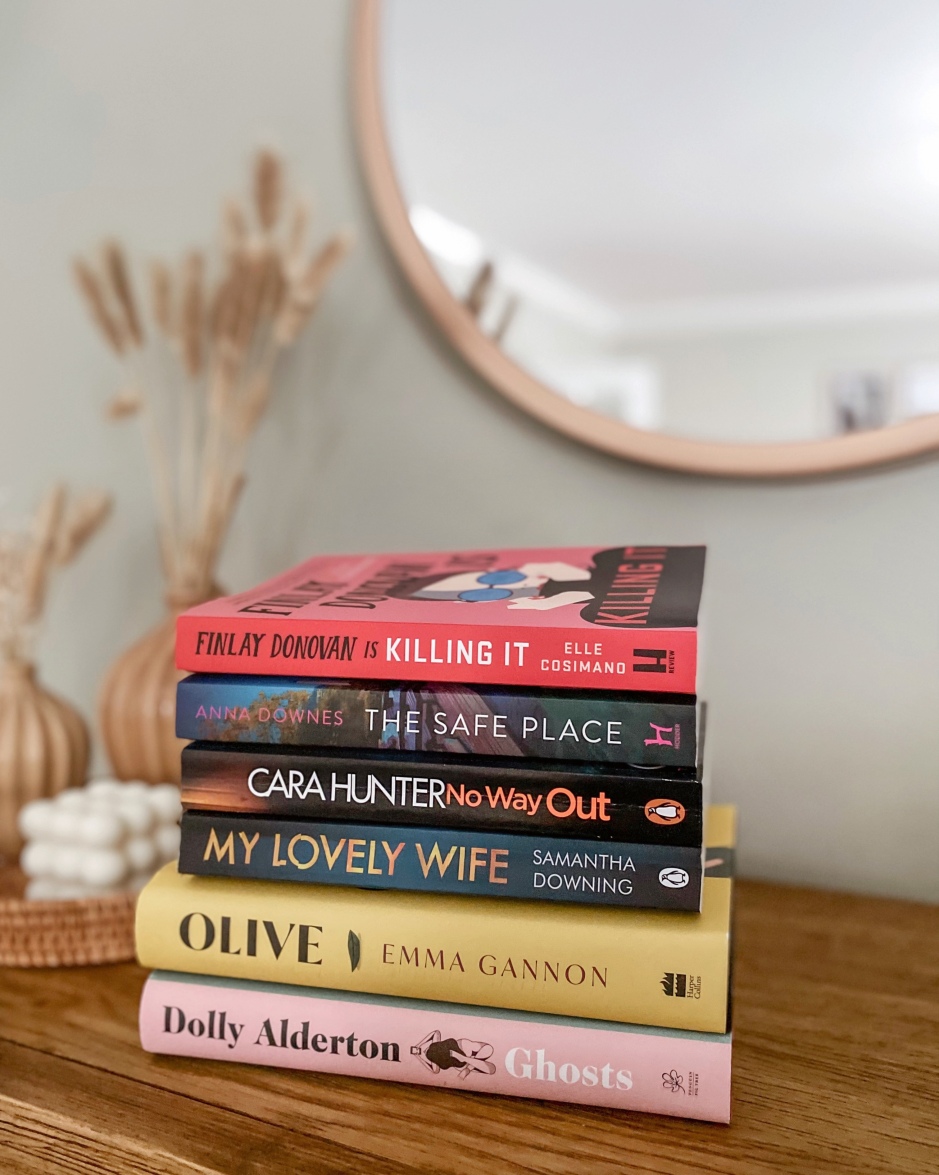 The Christmas holidays, and two children have just been pulled from the wreckage of their burning home in North Oxford. The toddler is dead, and his brother is soon fighting for his life. Why were they left in the house alone? Where is their mother, and why is their father not answering his phone? Then new evidence is discovered, and DI Fawley’s worst nightmare comes true.Because this fire wasn’t an accident.

I feel like I’m repeating myself but I have to say once again how much I love this series and how much I love Cara Hunter’s writing! No Way Out is Cara Hunter’s third book in the DI Adam Fawley series and it is every bit as captivating and clever as the others. In this police procedural, DI Fawley takes a more backseat role, and for good reason, he is an emotional wreck as his wife, Alex, has left him but that allows the others in his team to shine and I loved that. As ever, Cara Hunter has produced a storyline that has great pace and lots of twists and turns, with a truly great little twist at the end. I can’t wait for the next book in the series!

Nina Dean has arrived at her early thirties as a successful food writer with loving friends and family, plus a new home and neighbourhood. When she meets Max, a beguiling romantic hero who tells her on date one that he’s going to marry her, it feels like all is going to plan. A new relationship couldn’t have come at a better time – her thirties have not been the liberating, uncomplicated experience she was sold. Everywhere she turns, she is reminded of time passing and opportunities dwindling. Friendships are fading, ex-boyfriends are moving on and, worse, everyone’s moving to the suburbs. There’s no solace to be found in her family, with a mum who’s caught in a baffling mid-life makeover and a beloved dad who is vanishing in slow-motion into dementia.

I’m not sure I can summarise how much I loved this book. I had to pace my self so that I didn’t finish it too quickly but when I was doing something else I just ended up thinking how I really want to go back and just finish it. This is a very lovely and gentle and yet funny book. It is everything I want from a book. Dolly’s observations on dating in your 20s/30s, especially online dating, friendships as you get older and love and relationships are spot on. As someone who has used dating apps before (I met my fiancé online) I could see myself in Nina, all the disappointment, uncertainty and ghosting. It also made me so grateful that those days are behind me now. But this story is about so much more than just being ‘ghosted’ by a man. She explores themes like female friendship, dementia, growing up, and being one of the last ‘single’ friends. Although Ghosts is at times sad and realistic about the disappointments of life, it isn’t without its laughs or tender moments. So refreshingly relatable and I enjoyed it from start to finish!

Meet Jane. Newly arrived to Birmingham, Alabama, Jane is a broke dog-walker in Thornfield Estates––a gated community full of McMansions, shiny SUVs, and bored housewives. The kind of place where no one will notice if Jane lifts the discarded jewellery off the side tables of her well-heeled clients. Where no one will think to ask if Jane is her real name. But her luck changes when she meets Eddie­ Rochester. Recently widowed, Eddie is Thornfield Estates’ most mysterious resident. His wife, Bea, drowned in a boating accident with her best friend, their bodies lost to the deep. Jane can’t help but see an opportunity in Eddie–he’s rich, brooding, and handsome, he could also offer her the kind of protection she’s always yearned for.  Yet as Jane and Eddie fall for each other, Jane is increasingly haunted by the legend of Bea. How can she, plain Jane, ever measure up? And can she win Eddie’s heart before her past––or his––catches up to her?

Well this is how you write a domestic suspense thriller! I feel like I’ve just read my favourite thriller of 2021 and it’s only February! When it hooked me from the first page I knew it it would be a good one. This book kept me on my toes the entire time and I was completely invested in every character, all of them with some dark, twisted secrets… This is a reimagined, modern twist on JANE EYRE, a novel I’ve heard about, but never read. I was also unfamiliar with details of the plot so I think that’s why I enjoyed the twists and the story more. I completely devoured this book! There were some twists that I could see coming, but there were even more that took me by surprise. I love the writing style of author Rachel Hawkins. It’s very smooth and easy to get lost in her descriptions, characters lines, and imagery. It’s just a fun book that reveals secrets at a perfect pace. That made it very hard for me to put down. I can’t recommend this book enough.

Olive is in her early thirties and lives in London with long-term boyfriend, Jacob. She is a journalist who loves her job working at .dot magazine. She remains close to her three childhood and university friends, Bea, Cecily and Isla. As they all settle down, marrying and starting families, Olive is pretty sure she doesn’t want children, but everyone else thinks she will change her mind. Jacob wants children and so when he ends their relationship because of this, we follow Olive as she struggles, feeling distant from her friends

Focusing on Olive and her friends, the narrative moves from earlier points in their friendship, and Olive’s relationship with Jacob, providing context. Gannon writes movingly and with empathy, about the four womens’ different choices and situations, all of which have their difficulties. Motherhood, infertility, IVF, the choice to be child-free and infidelity that are all experienced by four friends. I was sucked into this book right from the very first page because I loved getting to know Olive as I really identified with her. I’m child free by choice, I knew that I didn’t want children pretty early in life so I experienced all the cliche comments that she was getting including the famous one: ‘You will change your mind”. Also this was the first time that I saw a woman who was child-free by choice portrayed in a book which is amazing but also shocking because it’s 2021! The book also explores female friendship and how the lives of Olive and her friends diverge, all based on their decisions/desires to become or not become mothers. This is a definite must read for any woman, young or old, and not just child-free ones. Highly recommended!

Emily Proudman just lost her acting agent, her job, and her apartment in one miserable day. Scott Denny, a successful and charismatic CEO, has a problem that neither his business acumen nor vast wealth can fix. Until he meets Emily. Scott offers Emily a summer job as a housekeeper on his remote, beautiful French estate. Enchanted by his lovely wife Nina, and his eccentric young daughter, Aurelia, Emily falls headlong into this oasis of wine-soaked days by the pool. But soon Emily realizes that Scott and Nina are hiding dangerous secrets, and if she doesn’t play along, the consequences could be deadly.

Well I must say I was very intrigued and excited to start this debut book. I always love checking out a new author. I loved the writing style, it was really good and kept me hanging on to every word. Downes created this doomed and sinister atmosphere and I was just waiting for something terrible to happen. The characters are interesting. The storyline is intriguing and the French home while it sounds like a dream come true, turns out to be creepy and strange. That being said, I felt a bit let down at the end. I expected something more, but i’m not sure what. Maybe something a bit more sinister? This is the author’s debut novel and it shows promise, I will be on the lookout for more books from her in the future.

Finlay Donovan is killing it . . . except, she’s really not. She’s a stressed-out single-mom of two and struggling novelist, Finlay’s life is in chaos: the new book she promised her literary agent isn’t written, her ex-husband fired the nanny without telling her, and this morning she had to send her four-year-old to school with hair duct-taped to her head after an incident with scissors. When Finlay is overheard discussing the plot of her new suspense novel with her agent over lunch, she’s mistaken for a contract killer, and inadvertently accepts an offer to dispose of a problem husband in order to make ends meet . . . Soon, Finlay discovers that crime in real life is a lot more difficult than its fictional counterpart, as she becomes tangled in a real-life murder investigation.

This book is the first in a new comedy-mystery series, about a single mum and struggling suspense novelist, whose fiction may or may not be, inspired by events in her own life. I loved this book so much, it was funny, unputdownable and refreshing. If you’ve watched and loved the Netflix TV show Dead To Me, you will love this. The story isn’t completely realistic, but it’s always entertaining. Finlay and her nanny Vero are a delight and they had me smiling and laughing on nearly every page. A little bit mystery, a little bit romance, and a whole lot of laughs which was exactly what we all need during this time.

Our love story is simple. I met a gorgeous woman. We fell in love. We had kids. We moved to the suburbs. We told each other our biggest dreams, and our darkest secrets. And then we got bored. We look like a normal couple. We’re your neighbours, the parents of your kid’s friend, the acquaintances you keep meaning to get dinner with.We all have secrets to keeping a marriage alive. Ours just happens to be getting away with murder.

Ok, this is a very messed up psychological thriller about a husband and wife with a really ‘interesting” fetish. It was labeled as Mr. and Mrs. Smith meets Dexter for a reason. It was a very addictive and twisted read that held my attention from the first page. The story is narrated from husband’s point of view and even though you should hate them both, for some reason you become sympathetic towards him. This novel didn’t follow the standard formula, in which someone dies, and we spend the remainder of the book figuring out the why and who. No! In this story, we are introduced to the villains early on. I really enjoyed how the author created an eerie atmosphere from the first page and the tension was carried on through out.  While I managed to predict one twist early on, I had no clue how things were going to play out at the end. Highly recommended.