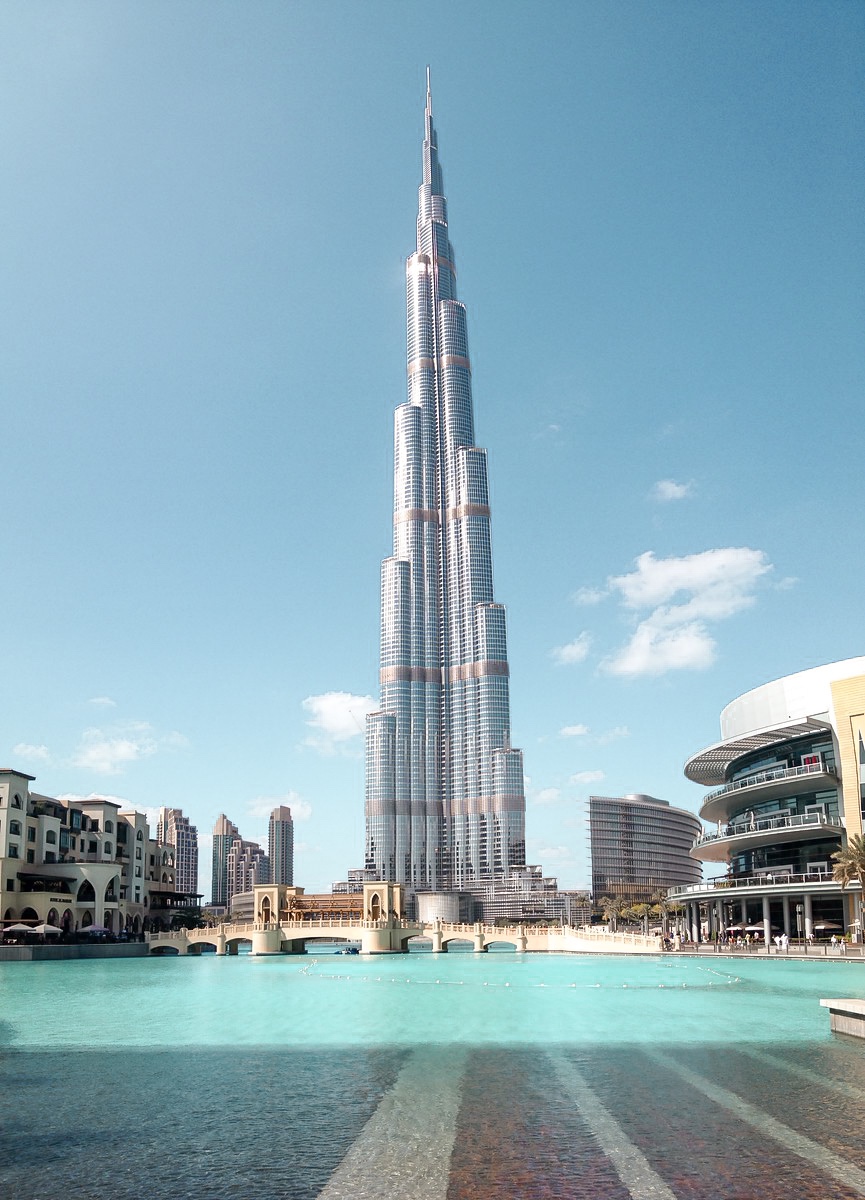 The driveway of this hotel is a great place to get a full-length photo of the Burj Khalifa both during the day and at night. You don’t need to stay here at The Address to be able to access this photo spot – anyone can access the driveway and you’ll often see the odd person shooting here. The biggest problem I had though was buses picking up guests of the hotel in the background so you might have to wait for a bit.

As you know Burj is the tallest building in the world with its 163 floors. For the price of 149AED (£30) you can go up to the 124th and 125th floor. Double that money and you can go up to the 148th! But I heard there isn’t a big difference when it comes to the view. That view though… just amazing! You can see the whole city but my favourite was the view of the fountains. It looks so good in pictures. We went there at 9am and it was pretty easy to get in. Even though we paid for our tickets online we still had to collect them and that meant queueing up. As it was early it only took us 3 minutes but when we were coming down an hour later it had started to get very crowded so I would suggest going there as early as possible, especially if you want to take pictures.

Shallow and clear water canals are spread all around this beautiful resort. You don’t have to be a guest to visit the public areas which you can access from Souk Medina Jumeirah. Wander through the souk and then head outside and take a traditional Abra boat that will take you on a 20 minute cruise for around £20 (bit pricey right) where you can take pictures, have a mini tour and soak up this amazing resort. If you don’t want to go on the boat, you can just walk around or sit in one of the restaurants where you will get great views of the Burj al Arab. Be aware however, there is a security guard who won’t let you cross the bridge towards the Burj if you are not a guest. But more about that later.

The desert is always a great place for amazing pictures but when you choose the right safari package things become unreal. There are many desert safaris and experiences you can choose from while in Dubai but I would suggest, in my opinion, the best one, which is Platinum Heritage. They are Dubai’s only eco desert safari, their Bedouin camps are built using natural wood and stone and nestled inside the privacy of a Royal desert retreat. They have vintage 1950s Land Rovers, camels, a falcon show, the possibility of an overnight stay and even balloon rides at sunrise! We were amazed by the whole afternoon and evening here. They arrange to pick you up from your hotel around lunchtime, take you to the desert where you start by going on a camel ride or ride on a vintage land rover (depending on what you have booked) where you end up at a sunset falcon show followed by a short trip to the camp where you have dinner and entertainment until approx 9pm. The price for the safari, which we did including a camel ride, was around £120 per person. Maybe it is a bit pricy but it was an unforgettable experience and we didn’t have to pay for anything else (except for the professional photos which were optional) whilst we were there.

This place is pretty new so it’s crowd free and it’s filled with shops and restaurants and has its own gorgeous beach with beanbags where you can relax and enjoy the view of the Atlantis at The Palm. If you didn’t know, you can’t access Atlantis’ Beach if you are not a guest so this spot is perfect for all the photos. The Pointe is located at The Palm and you have to get a taxi to get there.

Dubai Miracle Garden is a large park filled with flower sculptures. It is outside the of the city so I would suggest taking a taxi. The entrance fee is 55 AED or around £11. I would also suggest that you arrive early to avoid the crowd. We came at around 11 am and it was packed already.

Because Dubai is in desert and it’s hot the flowers can’t bloom and stay alive in the heat so the garden is closed during summer and it opens in November.

The wings of Mexico

Located in Downtown Dubai these wings created by Mexican artist Jorge Marín celebrate victory, dreams and human desire to fly – and make a great Instagram picture! You can get here from the Dubai Mall but it’s a long walk. It’s better to get a taxi to Downtown Palace or even better Yeldizlar restaurant, that way you will find it easier. Usually there is a queue to get the picture so try to get there early.

If you can’t live without snapping pictures at the beach, the La Mer Dubai is a place you should check out. It consists of four zones: The Beach, The Entertainment Hub, The North Island and The South Island. Each one of these zones have their own Insta-worthy spots. Just hit up its open beach with cute huts, its quirkily-designed cafes and restaurants, or one of its lanes filled with graffiti to spice up that Instagram account of yours.

Built in the early 1900s by merchants from the Persian town of Bastak, the Al Fahidi Historic District offers a contrast to the modern glassy buildings of downtown. Earthy-toned Arabian narrow alleys are such a relaxing place and mostly empty so perfect to take a photo in. We got here from Old Souk by taking an Abra boat for 2 AED across the Dubai Creek (you will need to pay cash for this so make sure you have some if you want to take the Abra). The easier way is just to take the metro to Al Fahidi station. While there you can visit Dubai Museum and if you need a break, make sure you visit Arabian Tea House which features traditional Arabian cuisine and drinks.

This area is beautiful from above but also from the ground. Every night on the hour and half past the hour, from 6pm-11pm, the Dubai Singing Fountains put on a show for 5 minutes. A song is played, the Burj Khalifa is lit up, and the fountains ‘dance’ to the music, like the Fountains of Bellagio in Las Vegas. If you want a great view of the fountain, show or not, go to the balcony of the Apple store (seen in the picture below).

There are lots of places inside the mall where you also can take photos, like the ice rink, The Human Waterfall which spans all four floors of the mall and you can even see a giant aquarium too! You can see all types of sealife here, from stingrays to fish to sharks – infact there are over 140 species of sea creatures in here.

Burj Park is on the other side of the fountains and usually less busy and with its dandelions installation perfect for a snap.